Mangrove restoration project in support of community resilience and the protection of biodiversity in Mouanko-Bolondo. 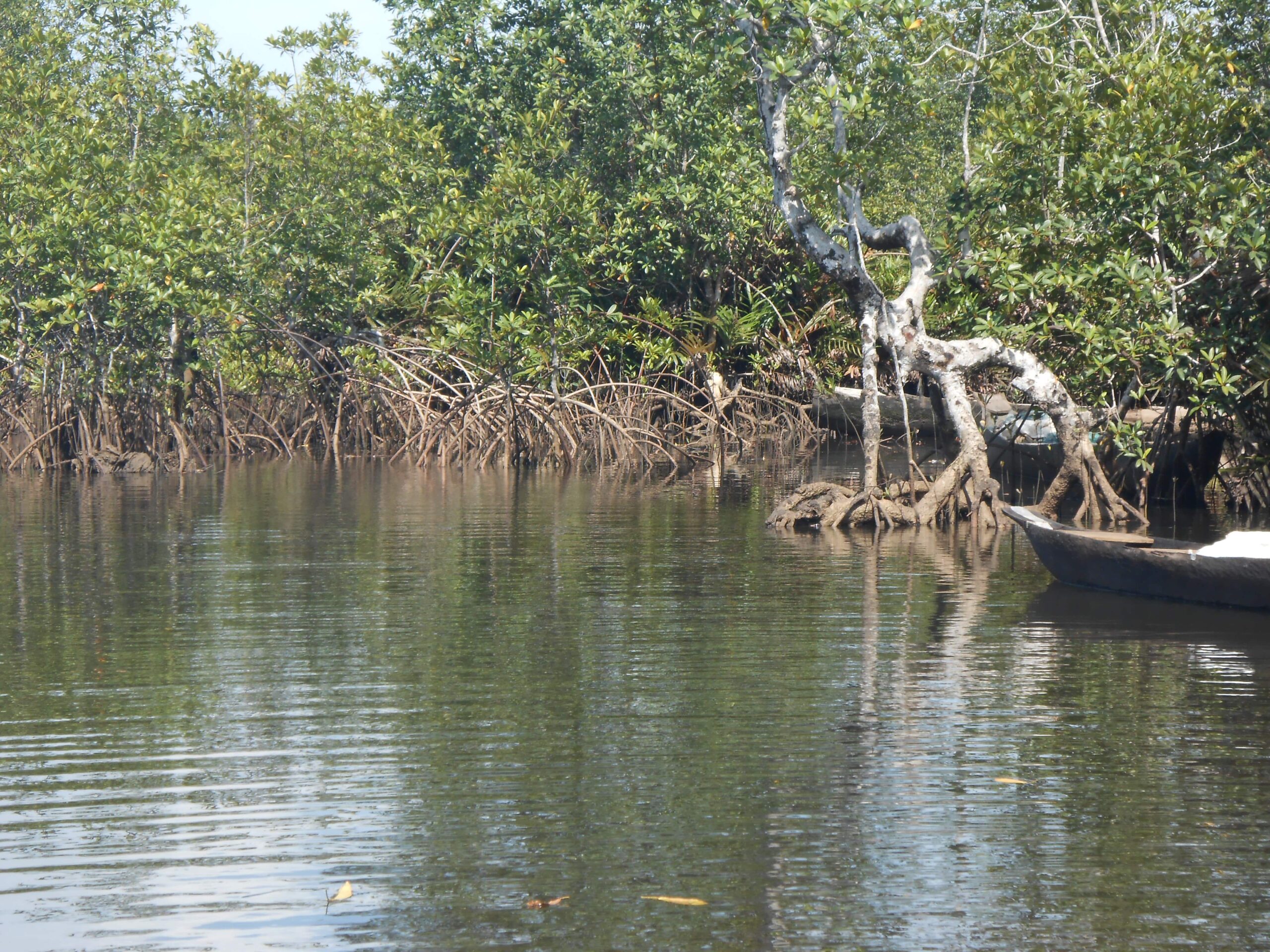 The area of this pilot project is home to several types of vegetation and habitats important for the maintenance of biological diversity with regard to its mangroves. The Cameroon estuary, in which the Mouanko-Bolondo area is located, is estimated to have around 203,600 hectares of mangrove, associated coastal forests, plantation, habitats and associated non-vegetated lands, including 93,550 hectares of “purely” land covered by the mangrove.

The coastal zone of Cameroon also shelters and feeds a varied fauna made up of birds, elephants, antelopes, chimpanzees, monkeys, crocodiles but also manatees, aquatic mammals, notable species of turtles, reptiles or even molluscs and shrimps.

The mangrove in Cameroon thus provides a large number of vital ecosystem services such as stabilizing and protecting the coastal zone, sequestering carbon (this marine swamp ecosystem has the particularity of retaining around 5 times more carbon than a terrestrial forest) and shelter an abundant biomass and a rich biodiversity (fauna and flora). It also makes it possible to allocate means of subsistence for nearly 30% of the population of the country living in the coastal zone (wood for smoking fish, for the construction of housing and boats, water-resistant thatch or even fodder for domestic animals), provide cultural services, or even have great potential in terms of ecotourism and environmental education.

Cameroon’s coastal regions are therefore an important issue for nature conservation in Central Africa. But due to their proximity to the sea, the activity of many companies, in particular agro-industrial, and the development of transport infrastructure make it an economic centre of attraction generating significant demographic growth. This results in multiple human pressures threatening the forest ecosystems of the Cameroonian coast, in particular the mangroves such as that of the Mouanko-Bolondo area. This situation considerably affects wildlife habitats, biodiversity and more generally natural resources and therefore the livelihoods of neighbouring communities.

The current health situation linked to the COVID-19 pandemic has prompted the Cameroonian authorities to close the borders. Although this crisis does not directly affect seafood, the fisheries sector * is subject to the indirect effects of the pandemic due to changes in consumer demand, market access or logistical problems related to restrictions on transport and borders in an area where trade with neighbouring countries is permanent. This situation had let to a decline in economic activity, and therefore in the turnover of traders, thus reducing the ability of the commune of Mouanko to intervene in projects such as those for the reforestation of mangroves.

Support the restoration and sustainable management of mangroves, the protection of biodiversity and the strengthening of local resilience in Mouanko-Bolondo to thus contribute to the resilience effort of ecosystems and residents of the periphery of the mangrove in the locality of Mouanko-Bolondo, within the “Cameroon Estuary” block.

Two main axes : Restore degraded mangrove areas by reforestation in the locality of Mouanko-Bolondo, within the “Cameroon Estuary” block and raise awareness in favour of a sustainable ecological transition around preservation of the mangrove ecosystem by raising awareness and mobilizing the habitants of Bolondo.

Restoration of ecosystems: the loss of forests, habitat of many species, is one of the 5 major causes of biodiversity loss.

The planting of 40,000 mangroves is planned in the enclaves of the Douala-Edéa National Park in the village of Bolondo.

Awareness: the project intends to raise awareness in favour of a sustainably ecological transition around the preservation of the mangrove ecosystem of the inhabitants of Bolondo. A launch workshop will be organised to inform and mobilize the various stakeholders of the pilot project. 4 other awareness workshops on the sustainable management of firewood among households in the area will also be planned during the first months of implementation.

Ecologically healthy coastal ecosystems will function as natural defences for humans and wildlife living on the continent. This project will thus contribute to the preservation of biodiversity, increased resilience and capacity of adaptation to the effects of climate change, as well as mitigation through the sequestration of carbon generated through reforestation. .


The CAMERR project contributes, at its scale, to the achievement of the following Sustainable Development Goals (SDGs):

Summary of the project

The CAMERR project contributes, at its scale, to the achievement of the following Sustainable Development Goals (SDGs):